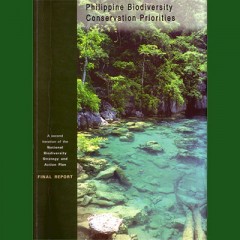 The PBCPP resulted in five key outputs which are listed below and are discussed further below:

The PBCPP named sixteen (16) terrestrial and six (6) marine biogeographic regions. The terrestrial regions were identified based on the geographic distribution patterns of vascular plants, arthropods, amphibians, reptiles, birds, and mammals, while the marine zones were defined based on the connectivity and dispersal features of an ocean circulation with broad transition zones based on the evolutionary geology of the archipelago and observed associated reef fish assemblages. The biogeographic regions of the Philippines. Click on the image to view a larger version.
(Source: Philippine Biodiversity Conservation Priorities, 2002)

From the identified biogeographic regions, the PBCPP convenors further noted and mapped out 206 integrated priority areas for biodiversity conservation initiatives, 170 of which are terrestrial and 36 are marine. These biologically important areas were so named according to analyses of data from five taxon-based thematic groups (plants, arthropods, amphibians and reptiles, birds, and mammals), two ecosystem-based groups (inland and marine waters), and one socio-economic group.

To address the biodiversity crisis in the aforementioned priority conservation areas, the convenors of the PBCPP enumerated five strategic actions, which are discussed below. These five complementary courses of action are a refined iteration of the six strategies discussed in the 1997 National Biodiversity Strategies and Action Plan which was published by the DENR.

Biodiversity corridors address a primary contributing factor to the country’s biodiversity crisis, fragmentation of ecosystems due to human activity. The sheer size and interconnected nature of biodiversity corridors, therefore, make it a feasible strategy for maintaining naturally occurring ecosystem and evolutionary processes: not only does it cover natural assemblage-level biodiversity, it also facilitates appropriate utilization and management approaches towards biodiversity conservation on a larger scale.

The corridor approach, as established by the PBCPP, addresses the conservation needs of 80% of all priority areas, covering well over 45 million hectares of the 206 identified biologically important conservation areas. A summary is provided below:

The fifth key output of the PBCPP is a collection of white papers that collated the most up-to-date (as of 2002, the time when the convention was held) knowledge and research concerning the taxonomic and thematic focuses of the convening working groups. Summaries of the white papers were provided in the full 2002 report, which you may download from this link.