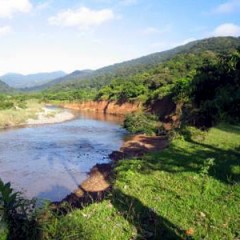 A watershed covers the entire area of land wherein all water (the runoff from rainfall and stormwater) drains into a common point, such as a stream, river, lake, or sea. So by definition, save for the very peaks of mountains or highland ridges, everything and everyone belongs within a watershed. It therefore makes sense that the protection of the integrity and quality of each watershed should be considered of utmost importance.

Watersheds collect rainfall and disperse the runoff to support life in all forms in the habitats that are found within them. These may be the lush vegetation in forests, the fauna that make homes out of these forest areas, and even the aquatic animals and microorganisms that belong in the narrowest of streams all the way to much larger lakes or seas toward which the collected water funnels into.

Of course, human populations also derive critical benefits from these physical and ecological functions. The water may be redirected to irrigate farmlands or be accessed through more modern urban waterworks for consumption and various other forms of utilization. People also consume farm crops, forest products, and animal products that depend on ecological support from watersheds. In addition, means for recreation and direct appreciation of natural resources are supported by healthy watersheds.

Unfortunately, it is also human influence that bears the most harmful impacts on watershed systems. Aggressive and unsustainable mining and logging practices in mountainous regions in the past have adversely reduced and degraded these areas’ forest plant cover (and this continues to this day, albeit to a lesser extent), which has weakened soil stability and permeability, leading to erosion and increased water turbidity. Because the quality of water in the higher regions is already affected, the low-lying ecological communities and systems will also be subject to its effects.

The establishment of urban infrastructures such as roads and buildings also bear heavily upon natural watershed functions. Because the concrete and steel materials used for these infrastructures are far less permeable than soil, the flow and drainage of water increases in both amount and velocity, which also causes soil to erode and water to become murky.

Needless to say, soil erosion and increased water turbidity is harmful to the natural ecosystems that depend on natural watershed runoff. Runoff water that goes through less of the natural filtration and distribution process facilitated by plants, and oftentimes also carrying more pollutants through human activity (oil, sediments, and metals, for example), tend to be more difficult for water-dwelling life forms to process and survive with. Considering the interconnected nature of ecological processes, the degradation of these ecosystems and the decline of living populations within will likely eventually contribute to the scarcity of resources on which human communities also depend.

In addition to the above impacts, the rate at which people draw from and utilize natural water supplies on the surface as well as groundwater is also cause for concern, as available water –  while seemingly abundant at face value –  is also a limited resource.

Resource management on the scale of watersheds makes sense as a strategy for land use planning and biodiversity conservation efforts because it views available resources, human benefits and impacts, and long-term sustainability in the big picture. This integrated perspective, in the context of existing environmental legislation, can help address issues of inadequate geographic coverage and representation of declared protected areas –  which has been a highly criticized shortcoming of the NIPAS Act of 1992.

Therefore, this is the approach being taken by the Department of Environment and Natural Resources (DENR), through its Forest Management Bureau (FMB). Among the priority programs of this office, prioritizing watershed resources through integrated land-use planning allows concerned stakeholders and decision-makers to assess the optimum level of benefit that can be drawn from existing watershed and forest resources (including water supply for agricultural, domestic, and industrial purposes), while keeping the sustainability and the long-term health and integrity of entire watersheds in mind. At the same time, such planning methods can also lead to the identification of forest lands which require foremost protection efforts.