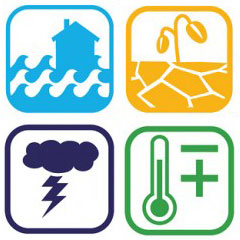 Climate change is a controversial, much-debated environmental concern that has gained traction in the past few decades due to the increasingly noteworthy data on global temperature changes. It is an enduring, overarching, and very real issue that demands attention and action because of its far-reaching destructive effects that put both natural and man-made living systems alike in harm’s way.

Climate change is a controversial, much-debated environmental concern that has gained traction in the past few decades due to the increasingly noteworthy data on global temperature changes. It is an enduring, overarching, and very real issue that demands attention and action because of its far-reaching destructive effects that put both natural and man-made living systems alike in harm’s way. Because of its capacity to alter habitats, life cycles, and ecological services, this phenomenon is a key threat to biodiversity all over the world.

To set things straight, climate change does occur naturally over time. However, this supposedly natural process has turned into a major problem in recent years due to the influence of human behavior. Rapid, insufficiently regulated, and unsustainable consumption of fossil fuels and overproduction of greenhouse gases are speeding up the changes and effects to global climate patterns at an alarming rate. Worse yet, studies are indicating that, while it’s not too late to temper and adapt to the immediate harsh effects, irreversible damage has already been done.

The concept of climate change has long been a subject of debate. Some argue that recently observed climate-related phenomena are merely instances of extreme weather and that contemporary climate science is fear-mongering by emphasizing the worst-case scenario. However, the signs that science has gathered over the years are hard to dispute; climate change on a consistent, global scale is undeniably occurring. The US National Oceanic and Atmospheric Administration confirmed the occurrence of global climatic change through observation and measurement of ten key physical features of the planet. (Source: www.climate.noaa.gov/warmingworld)

Ten critical indicators, as observed over longer periods of time (decades’ and centuries’ worth, in fact) and summarized by US government’s National Oceanic and Atmospheric Administration (NOAA) below, serve as irrevocable evidence. Seven of these indicators – land surface air temperature, sea-surface temperature, marine air temperature, sea level, tropospheric temperature, ocean heat content, and specific humidity – are expected to increase in a warming world. Meanwhile, snow cover, sea-ice extent, and glacier mass decline in the event of planet-wide warming. Based on 2009 data, NOAA confirmed that notable shifts in all ten indicators suggest the reality of a rapidly changing global climate. A graph released by the United Nations Office for Disaster Risk Reduction released in 2012 exhibits the uptrend in frequency of climate-related disasters around the world over the past three decades. (Source: www.unisdr.org)

In addition to these indicators, recent meteorological events have reflected the influence of an abruptly changing climate in the form of extreme weather patterns. The United Nations Office for Disaster Risk Reduction, in its 2011 annual report, highlighted the incidence trend of climate-related disasters during the period of 1980-2011. The figures show that the frequency and severity of storms and flooding have been on a significant upward trend all around the world. Typhoons, for example, that have wind speeds of 180-185kph and higher have noticeably been on the rise. Incidences of extreme temperatures have also increased during this timeframe, albeit at a lesser, but no less alarming rate.

Observations of this nature are important to note because instances of severe weather have massive direct impacts on impact human populations all over the world, with more particular risks and perils threatening those in developing and emerging nations. An editorial cartoon that appeared on USA Today in December 2009 – just before the proceedings of the 2009 United Nations Climate Change Conference in Copenhagen began – gained immense popularity for its clever insight. (Source: USA Today/Joel Pett)

The harsh impacts of global temperature shifts brought about by climate change to island nations such as the Philippines are legitimate causes for concern in terms of biodiversity conservation. Especially vulnerable to the devastating repercussions of this phenomenon are low-lying coastal regions and other biogeographically isolated areas, which are abundant in this archipelagic country.

Hence, climate change is one of the most important environmental agenda for FPE, as determined in collaboration with the organization’s Regional Advisory Councils. Recognizing the current climate change dilemma as one of the leading causes of biodiversity loss, FPE pushes for mitigating and adaptation measures through site-specific, multi-faceted strategies and solutions that aim to minimize harmful emissions and waste, pursue the adoption of renewable energy sources, and promote a climate-resilient Philippines. Indeed, millions of Pesos’ worth of investments in FPE-supported conservation sites will ultimately go to waste if climate change would only further accelerate the already alarming rate of biodiversity loss here.