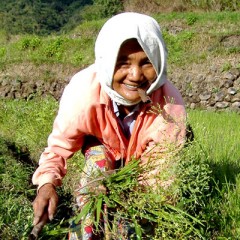 Viewing the climate change situation in light of tangible, relatable real-world issues such as food security for developing nations is a concrete way of communicating the gravity of the situation. Doing so can help favorably influence national and international policy and decision-makers.

Viewing the climate change situation in light of tangible, relatable real-world issues such as food security for developing nations is a concrete way of communicating the gravity of the situation. Doing so can help favorably influence national and international policy and decision-makers. The effect of climate change on food security should be more than enough reason to act now. (FPE)

A paper published by Oxfam International last September 2013 entitled “Growing Disruption: Climate Change, Food, and the Fight Against Hunger” examined climate change in light of the hunger and poverty situation that continues to pervade in developing countries. The information provided in the report is critical in understanding the immediate impacts of climate change in the context of vulnerable countries such as the Philippines, where a large fraction of the population still live below the poverty line and is still reliant on agricultural and other natural resource-based livelihood and subsistence. While climate change affects everyone, affluent and poor alike, it is the latter who are more exposed, Oxfam iterates in the paper, echoing the statements made by the UNDP when it declared 2012 as the International Year of Sustainable Energy.

Climate change is a threat to the four pillars of food security, which are availability, access, utilization, and stability. As such, Oxfam speculates that up to a 20% increase in underfed and undernourished populations all over the world can be expected by the middle of this century. Crop production and distribution systems, livelihoods and economics, and health-rooted concerns are all subject to worsen in light of the current and imminent pressures applied by the climate situation.

A Threat to Food Production

The effects of climate change on ecological systems is clearly a critical factor, as gradually increasing global temperatures are harming the natural survival capacities of various species, including plants. Apart from the destruction brought about by extreme instances of weather, such as heat waves, droughts, typhoons, and floods – all influenced by the weather pattern changes dictated by the adjusting climate – the behavior and growth of the plant species themselves also exhibit changes. Warmer temperatures, for example, favor faster crop maturity, but not with the proper balance of water and nutrients, thereby affecting the nutritional quality of the food. In addition to this, the report also notes that the warming conditions favor the propagation and distribution of crop pests and other harmful plant diseases, not to mention risks of accelerated spoilage of harvest supplies. Needless to say, agriculturally-dependent communities immediately stand to suffer the repercussions of such cases.

Infrastructure Damage and Other Accessibility Limitations

Living organisms are not the only things affected by climate change, even in the context of the food security issue. Climate change also does damage on the non-living systems and structures that people use to provide and distribute food supplies. Case in point: Infrastructure damage risk increases as climate change influences harsher and increasingly unpredictable weather. Bridges, storage facilities and equipment, transport systems, and other such means that facilitate food supply accessibility are all vulnerable to damage due to severe weather, such as in the forms of storms and typhoons. Indirect effects of weather-related disasters brought about by the changing global climate can also adversely affect the delivery of basic human needs such as food. (FPE)

Consequently, the limitations resulting from hampered production and supply will create adverse economic ripple effects, as well, causing food prices to shoot up beyond the reach of those who live below the poverty line. Again, it is the poor who are placed at a disadvantage.