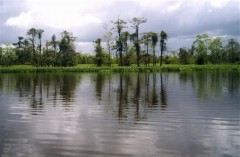 Description: Known as the home of record-setting Lolong, the saltwater crocodile (Crocodylus porosus) that earned the distinction of being the world's largest captive crocodile to date, the Agusan marshland is one of the most significant wetlands of the country. Acting like a sponge, the site contains almost 15% of the country’s freshwater resources in the form of swamp forests.

Agusan Marsh is surrounded mostly by agricultural lands. Mine operatiosn in the headwater create receptacles and serve as carriers of silt, fecal materials, mine tailings, and other harmful wastes. This damages water quality, and heavy siltation disturbs the ecosystem.

Talacogon's three barangays within Agusan Marsh has a total of 6,500 residents, 95% of whom belong to the Manobo tribe (within the Ancestral Domain Sustainable Development Protection Plan [ADSDPP] Loreto).  The leadership system among Manobos rest in the elders, called Manigaon. They manage community affairs, ensure peace, and engage with other communities. The Manobo spirituality and beliefs reflect their profound ties to the land and its resources.

Municipalities claim jurisdiction over the marsh. In the Municipality of Loreto, the marshland is part of ancestral domain (Certificate of Ancestral Domain Title or CADT 090). There is a critical need to harmonize the NIPAS act and the IPRA law in the management of the marsh.