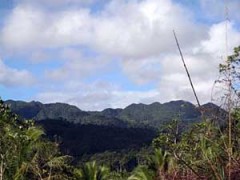 Description: Mt. Nacolod is a very high priority key biodiversity area (KBA). It is a prime location for the region’s flora and fauna, being home to more than half of Leyte's known plant species. It harbors 134 birds, 111 herpetofauna species, and almost all known mammal species recorded in this area. A recent survey of this KBA also brought new discoveries: three species of volant mammals, cinnamon, and two new frog species of the Platymantis family. However, the conservation of Mt. Nacolod is still challenged by illegal collection and poaching of wildlife, conversion to agricultural use, and conflicting land tenurialship, among others.

Biodiversity and forest threats mapping on the ground identified the following: