[2012] Charcoal Making in the 3rd District of Negros Occidental 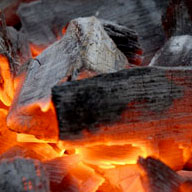 Charcoal is an important resource in Negros Occidental, being a cheap, basic source of fuel for its rural constituents, as well as an essential source of fuel for the province’s booming food industry (the “inasal” chicken barbecue and “lechon” or roasted pig), as well as other uses in poultry farming and horticulture.

Charcoal is an important livelihood source in Negros Occidental, but its production creates a huge strain on the natural resources of the area. (FPE/Myrissa L. Tabao)

Charcoal is an important resource in Negros Occidental, being a cheap, basic source of fuel for its rural constituents, as well as an essential source of fuel for the province’s booming food industry (the “inasal” chicken barbecue and “lechon” or roasted pig), as well as other uses in poultry farming and horticulture. The high demand from various levels of stakeholders contributes to deforestation, as much of the raw materials are drawn from its remaining forests such as the North Negros National Park, often illegally.

This research was put together to gather baseline information on the charcoal industry in the area, concentrating on the cities of Talisay and Silay and the municipalities of E.B. Magalona and Murcia – sites comprising the only district wherein a total log ban is imposed under RA No. 9741. It was designed to identify the production sites and measured the scale and economic value of the charcoal industry within the district. It also described the production methods, the tree species used, and the volume of production in detail. The driving forces or motivations that influence the key players and stakeholders of the industry were also drawn out.

The study was conducted from December 2011 to April 2012, using surveys, interviews, and focused group discussions to draw out the perspectives of the charcoal producers, PO and local government officials, and other informants on the ground. A total of 173 respondents participated. Objective observations with photo/video documentation were also made on the production processes, locations, volumes, and other pertinent details. Towards the end of the research, a stakeholders’ forum was organized to validate the findings and gather additional information. Negros Occidental is known as the home of the popular "inasal" roasted chicken, a booming industry that is largely dependent on charcoal. (FPE/Myrissa L. Tabao)

The research revealed that charcoal production is a labor-intensive and low-profit industry, as well as a health and environment hazard.  On average, a producer can make 6-10 sacks per month, which sell for only around PhP 110 per sack in Murcia. The amount of product also depends on the availability of the woods (usually Ipil-ipil, Madre de Cacao, and other fruit and native trees) used, which have been proven to be already scarce in the area.

However, the industry still provides for the immediate family needs for its laborers, most of whom belong among the lowest-earning demographic, have generally low educational attainment that limits their employment opportunities, and perceive themselves as economically poor.

Recommendations came from all levels of stakeholders. The local communities suggested the provision of alternative livelihood programs by the government, as well as the formation of cooperatives and improvement of farm-to-market infrastructure. Other stakeholders highlighted legal frameworks for monitoring and regulating the charcoal industry, sustainable harvesting practices and more sound production methods, improved community-managed forestry system with due enforcement, and increased support for the Bantay Bukid Brigade. The researchers proposed for an intensive environmental education campaign and a standardized charcoal production process. They also suggested commercialized planting of the preferred fast-growing tree species to support the producers’ needs, as well as to augment monitoring efforts by means of a more empowered Bantay Bukid Brigade. A view of the North Negros Natural Park. (Errol Gatumbato)

* The full report of this research project may be viewed and downloaded here.